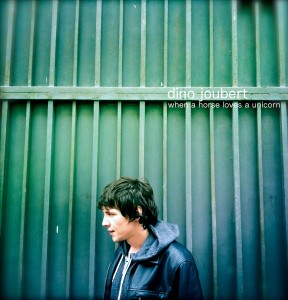 Berlin is a true source of inspiration for me. People from all nations and from every social background meet here,” says Dino Joubert, who once left the sleepy town of Soest, in the German region of Sauerland, for a life as a student in Berlin.

Dino Joubert is not only the name of this Berlin-based composer and musician, but his entire band is incorporated in this moniker. Using guitars, Rhodes piano, bass, drums and harmony vocals they create the lovingly detailed soundscapes, which bring Dino’s compositions to perfection. The pop character of Dino Joubert’s catchy melodies is complemented to the fullest by his musical and lyrical depth. They testify to the experiences that Dino has made in his life thus far. His lyrics range from very personal, sometimes intimate observations to subjects of universal importance.

Dino Joubert is a thoroughly emotional person, who senses moods very well, but also is able to create them with a lot of sensitiveness. He is a friendly, humble and polite guy, a bit shy though at the same time.

If asked for the artists that have inspired him most, Nick Drake, Elliott Smith, Damien Rice, The Kinks, and Patrick Watson will be the first names mentioned. „I started making music, when I heard Magical Mystery Tour by The Beatles. I was 16 then. I was so fascinated by the feeling that music could trigger that I also wanted to venture into that world,“ he continues.

Dino Joubert debut album When A Horse Loves A Unicorn was released in late summer 2012 and touches on the big questions of life and love. For 2017 the singer / songwriter announces a new release and a tour. “I’m really looking forward to getting started with our new music and spread the love that comes with it into the world. It felt great to see that it worked out with the music and all the great people in the band!“ he enthuses.

Dino Joubert’s music carries the rare qualities, which seem to almost have vanished in 2017, and make him and his band shine.